My company made an interactive timeline showing the history of how this large Telecom company grew to be one of the leading companies in the world. The communications manager was satisfied with our work, but she wanted to display the timeline on more than just the little screen on the PC. We told her that it wasn’t a problem, and advised them to buy a flat screen TV to mount on the wall.

Client: “Get the PC signal from the PC onto the TV?”

Me: "The timeline will be mirrored on the LCD.“

Client (interrupts): "But, where shall we place the mirror?”

In 2005, I was in London working as a typesetter for a magazine from a small publisher. My client, who was a foot taller than me, got very upset everytime my phone rang. Not that the phone rang that many times a day, but anyway, one day he asked me (not very politely) not to answer any phone calls.

Obviously my phone rang at that very moment. It was my wife. The client started to yell at me. I thought that it was just too much and so I told him to fuck off - I was leaving.

Before I reached the door the client grabbed me by the t-shirt and tried to punch me in the face. I was lucky that he was really clumsy and managed to avoid the blow. After punching the air a couple of times, I think that he came back to his mind and offered me a couple hundred pounds extra so that the matter would be settled, but I refused. By that time people from neighboring offices had come out to see what was happening.

I left the office and went to a police station two blocks down the road. Unfortunately, I was leaving England in a month and couldn’t press serious charges against him. Moral of the story? Don’t tell your clients to fuck off.

So you’re sitting in the office. It’s Friday and it’s ‘round about 4PM and you get a phone call: “We want to change everything to Papyrus. Didn’t you see Avatar? Everyone knows Papyrus. We’ve decided that we want Papyrus.” After several minutes of attempting to get the client to budge, you hang up. You must change everything to Papyrus or face not making the rent this month.

So what do you do? Some designers might start crying or yelling or bleeding. Others might take out their anger by setting up elaborate traps for their interns. But what do you do?  You reach for a Clients From Hell stress ball.

These babies are going to stop you from killing your clients each and every time they ask for Comic Sans, Papyrus, or reject your invoice outright. Don’t kill your clients, buy a stress ball from the new CFH store.

Client: “This isn’t what I was looking for.”

Me: "No problem, this is all part of the process. Can you explain what you don’t like?“

Client: "I’d rather shove you down the stairs for wasting my time.”

Kelly wants to know if there is something for the background available besides the blue ladies underwear pattern.

Client: “I am not sure how to find them. Can I just email you the login information for those sites? Please let me know, I am still working on finding the link for Twitter.”

After my boss met with a sailboat captain, which we did the promotional website for, he calls me up to his computer. He explained that the client’s wife had burnt some discs for us with photos from their latest trip to the Bahamas. We were to use them to update their photo gallery and blog.

My boss proceeded to click on a random picture, and to our surprise, the photo showed the client in a t-shirt, with no pants, peeing overboard.

Me: “You do realise that name’s almost identical to [name] - a huge international corporation.”

Client: “Yes. It’s a great idea. People will come to my website, thinking I’m them.”

Me: “Do you also realise that [name] have a habit of suing people for that sort of thing.”

Client: “Wow! Just think of the publicity I’ll get. A true "David and Goliath” story. The press will love it! Fantastic. Do it!“

Client: “You’ll get the publicity too! Don’t you want free publicity?”

I do a lot of work for a church, and in one of the projects there was a small mistake. After chattin with the church elders, they concluded that the best way to make it right was to punish me by not paying me, but continuing to work with me in future projects.

“I don’t think we can pay you for your time, that’s what we’ve determined is the best way for redemption” 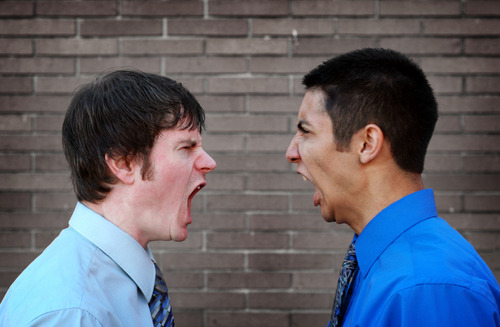 Sometimes, clients get violent. Sometimes, we find it funny. Other times, it’s down right wrong. In anticipation of our forthcoming book, the CFH editorial staff are looking for stories about your most belligerent client. We’re looking for hostility, emotionally-abusive insults, racism, homophobia, the punching of inanimate objects and pet-sacrifices (among other things). Clients like these are the worst to deal with and we want to hear all about ‘em. Come join hands with us, send us a submission.

A collection of anonymously contributed client horror stories from designers.

PODCAST
Providing insights into survival and exploring the future of the self-employed.